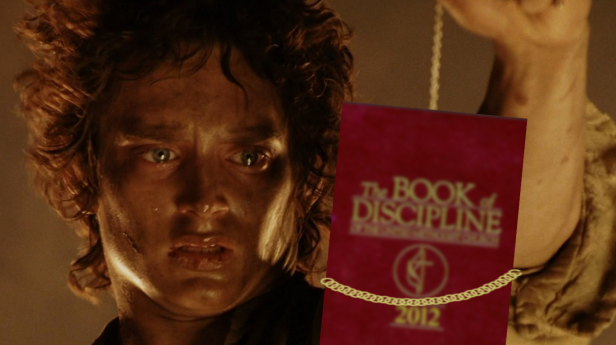 The United Methodist Church has eight books of discipline.  Yep… eight.  Besides the ubiquitous maroon hard-back version that each UM pastor dutifully purchases every four years (with E-book edition for the tech savvy and leather-bound for bishops and district superintendents) there is a customized UM Book of Discipline for each of our seven central conferences outside the U.S.  As near as I can tell, all eight books of discipline do not exist in the same place anywhere on earth. (Not even the official UM archives at Drew University owns all eight.)  The Northern Europe and Eurasia Central Conference Book of Discipline can be viewed here.

The adaptations made by the central conferences are modest.  Attempts to customized things like the Social Principles were put down by the general church in the 1970’s.  Names of committees and agencies are adapted to the local context.  Rules about properties reflect the laws of the nations that comprise the central conferences.  But the seven adaptations are, indeed, full-fledged Books of Discipline and are acknowledged as such in the mother book, which spells out what can be adapted and what cannot.  Each central conference is empowered to have a judicial court to interpret these disciplines.

The fact that we currently have eight disciplines is helpful to remember when considering my proposals for achieving amicable unity in the UMC.  Both jurisdictional solutions extend the power to create adapted BOD’s to domestic bodies.  My dual-jurisdictional plan replaces our five jurisdictions with two new ones based on ideology.  My “Restore and Release Plan” creates one additional affiliate jurisdiction for those who cannot live by our official stance on human sexuality.

You might think of my two-jurisdiction solution as “The Middle Earth Plan”.  Our seven central conference disciplines would be joined by an adapted version for each of the new jurisdictions.  These nine disciplines would yield to the one book “forged to rule them all” and editable only by general conference.  Under this plan, no single local church would live directly under the mother book.  The general boards and agencies, however, would be governed by “the one”.

Under my six-jurisdiction plan, the five jurisdictions would operate under the authority of the mother book.  Only one new discipline would be forged for the annual conferences that choose to join the Affiliate Progressive Jurisdiction.  This plan would give us a mere nine books of discipline.

Under both plans, the authority to adapt is expanded to include the body of the Social Principles.  The Constitution, General Rules, Ministry of all Christians, Our Theological Task, the Preface/Preamble to the Social Principles, and those parts that affect the working of the general church would continue to be off limits.

6 thoughts on “Should the UMC have Nine Books of Discipline or Ten?”