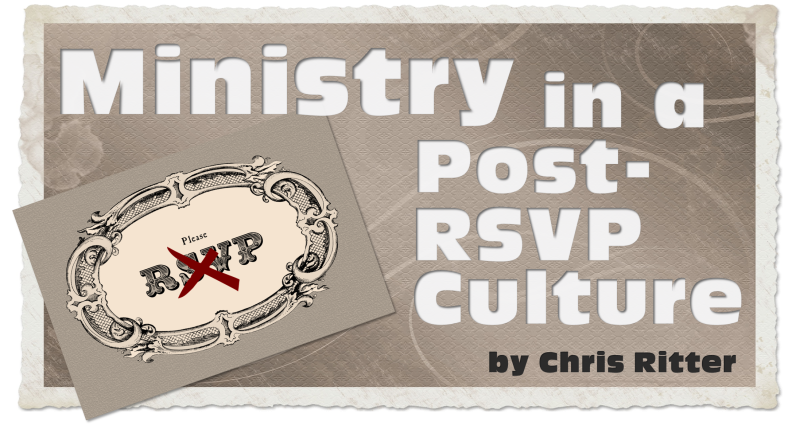 So much in church life centers around getting people together.  In many places, catered meals have replaced potlucks in order to accommodate people’s over-scheduled lives. Budgets are always tight, and waste is poor stewardship of both time and money.  There are materials to order and rooms to assign.  It sure was nice when people let us know whether to expect them.

No one RSVP’s much anymore.   We can talk about all the cultural reasons why this might be happening, how frustrating it is for those doing the planning, and how this generally signals the decline of civilization.  After all this conversation is done, however, the fact remains:  We can no longer count on people to let us know whether they are coming to the stuff we plan.

But those days are gone and some of the factors are somewhat beyond individual control.  Believe me, I understand.  Sometimes I am the one who does not return an RSVP in a timely fashion.  If the invitation involves my family, there are multiple calendars to coordinate.  Even putting my name on a clipboard seems like a little too much commitment when I am already over-committed.

After cancelling some ministry events due to low sign-up only to later be told by several people they were planning to attend, the team at our church has come to peace with the fact that we will not know ahead of time who to expect.  We have decided just to deal with it.  Here are three ways we are doing that:

ONE:  ORDERING ON THE FLY

Our orientation event for newcomers is called “Pizza with the Pastor”.  Every month or two, we contact all the new people who have been coming on Sunday morning and invite them to this hour-long orientation at noon on a given Sunday.  We used to struggle to get a head count of who was coming so we could have enough without ordering too much.  It didn’t work so well.

Our new way of doing Pizza with the Pastor is gathering at noon with no count of who might be coming. We still issue invitations and invite an RSVP, but always include the line that it is fine just to come at the last minute.  When everyone arrives at noon, we have someone ready to quickly order the pizza for half-hour delivery.  Our staff does the “talking” portion of the event for the first half of the hour and we have food and informal fellowship when the pizza arrives.  It works!  It also gives us the freedom of inviting people at the last minute.

For classes involving study books, we might do a first lesson without the books and make a quick order so that the materials are there by week #2.  Some publishers will allow you to photocopy the first week’s lesson with the promise that you will be ordering soon.  Some publishers also make the first chapter available online as a free preview.  We are also not shy about returning any surplus materials that may have been ordered or selling them online.

The “Find Your People Party” is our connection event for those seeking to find a small group in our church.  It is sort of a mixer where people can meet those interested in starting a new group or hear from small groups who are seeking new members. (Think of it as “speed dating” for a small group.)  We cancelled a FYPP not too long ago due to low sign-up’s only to later hear from many people they were planning on coming all along.  Frustrating!

Food is a big part of FYPP.  Everyone feels a little more social with food in their hands.  Rather than providing all the food as in times past, we are now asking those who are coming to bring an appetizer, hors d’oeuvres, or snack to share.  We make it clear that anything goes.  This gives those who like to prepare food an outlet to make something homemade while allowing others to grab a bag of Cheetos on their way to the church.  We plan FYPP at a time other than the dinner hour so that no one has the expectation of being fed a full meal.  Handling the food in this way allows us to meet the ministry objective without fretting over a meal.

For presenters, it is often very nice to know the size crowd you might be dealing with.  A presentation planned for fifty might seem a little pretentious if only five show up.  To accommodate to the post-RSVP culture, we often plan events with the smallest group in mind.  By this I mean we anticipate a setting where dialog, sharing, and time for interaction would be appropriate.  If the crowd turns out to be larger than would make this manageable, we simply divide the group into smaller units for the interactive portion.  A presenter can speak to four small groups scattered around a room as easily as to a group of only a handful of people.  We plan events for a single small group and make as many small groups as we need based on who shows up.  This also served to build relationships.

I often use something I first saw done by Timothy Bias, now General Secretary of Discipleship Ministries for the UMC.  When he led devotions with a room full of people, he would organize us around the space in a big circle based on some random variable like birthday.  Everyone would then be grouped into threes and each triad was cued to talk briefly about someone they each were related to that “showed them Jesus”.  Tim would share a story of his own as an example.  The groups would spend 3-5 minutes on this while also getting acquainted.  He would then rotate one person in each group and give the newly constituted groups the instruction: “Talk about someone outside your family that showed you Jesus.”  Again, he would share a story of his own before releasing the groups for conversation.  As time allowed, he might rotate someone from each group again and instruct each group: “Talk about a time you said yes to Jesus.”

It was amazing to me how the room warmed with stories of faith being shared all around.  Another thing about this approach is that it is completely scale-able.  It didn’t matter if twenty or two hundred people were in the room.  Relationships were built and faith was strengthened.  The leader just needed to develop the gift of orchestrating people into smaller groupings and keeping the conversations on point.  We use this format for the opening moments of “JoinFest”, our membership preparation event.  It really gets people talking about their faith journey.

Worrying less about tracking people down to see if they are coming gives us freedom to promote our events in creative ways.  Staff time spent calling people is much better spent on creative communication that gets people excited about attending.  Once people have been coming a while, their patterns are easier to predict.  We save our creativity for efforts to get people from Sunday morning attendance into spiritual growth and deeper commitment.

Well, there you have three ways we are accommodating to the post-RSVP culture.  I would love to hear your ideas for planning ministry when no one lets us know ahead of time if they are coming.   Répondez s’il vous plaît.

2 thoughts on “Ministry in a Post-RSVP Culture”