Around 1800, a sand bar developed on the Illinois side of the Mississippi River just across from St. Louis, Missouri.  By mid-century it had grown into thickly forested island under the control of neither state.  Because it was middle ground, it became a favored location for duels.   The most famous combatants on “Bloody Island” were James Shields and a 33-year-old Abraham Lincoln whose saber battle, through the intervention of friends, ended bloodlessly.

Middle ground is battle ground.  Just ask purple states like Ohio, Florida, and North Carolina that are currently inundated with political media because they might fall either way.  As Crimea is disputed territory between Russia and Ukraine, the United Methodist Church is disputed space between the cultural left and the cultural right in the United States.

“Partisan political forces are driving our church toward schism,” is a mantra is often heard in our church.  While the risk of schism is very real, at least some of these forces are on record as opposing a split.  It might be worth considering the partisan forces encouraging the UMC to stay together… and why.

Faith is interwoven into the fabric of our nation.  Although we have expanded into a global church, United Methodism is arguably the most inherently American expression of religion on the planet.  The ecclesial form of Methodism was born on this continent just after the Revolutionary War.   We shaped and were shaped by the American frontier.  Our three branches of church government are modeled on the framework of the U.S. Constitution.  Being American to the core is both a blessing and a curse for us.  As an indigenous form of Christianity, we are fluent in the lingua franca.  Partisan forces, however, prey on us middling folks in in a particular way.

Astute observers of our denomination will monitor the millions of dollars flowing into our church from the outside that seek to influence our direction.  From what I can tell, perhaps a fourth of this originates from conservative foundations into groups like the Institute on Religion and Democracy (IRD) and its United Methodist wing, UMAction.  The lion’s share of outside money supports efforts to move our church in a more liberal direction.  An example from the left would be Reconciling Ministries Network (RMN), an organization dedicated to changing the UMC’s position on homosexuality.  Evidently those working to disrupt the hegemony of heterosexuality recognize the traditional Christian view as a primary obstacle.  Being largely funded from outside the church, RMN does scant fundraising from actual United Methodists.  (Follow the money trail from RMN to sources like the Arcus Foundation funded by billionaire Jon Stryker.)  The secular money received in grants provides staffing, organization, and hires the services of professional PR firms to target movable laity, clergy, and conferences.  I met protesters at General Conference that had their housing and other expenses paid by these non-UM sources.  Such actions cause the church to artificially focus more energy on these issues than our normal flow of ministry decision-making would otherwise necessitate.

Mark Tooley, the head of IRD, and Matt Berryman, the head of RMN, don’t have much in common.  One thing they do share is a strong stance against schism in the UMC.  Both United Methodists, I am sure they both believe in Christian unity for the noblest of reasons.  But it is also true that culture warriors need a theater of operation populated by the sway-able, a “movable middle.”  A moderate, indigenous, American denomination like the UMC makes a target-rich environment for those hoping to move the dial.

For all the talk about partisan forces tearing the church apart, it is interesting to note the partisan forces in our church don’t actually want to see the UMC formally divided.  Without a playing field there can be no play.  A UMC split creates new bodies much more resistant to influence.   We ask whether a person supports unity when perhaps the better question is whether they foster good will among Christians of varying opinion.  Not everyone supporting institutional unity is an agent of institutional harmony.

In the 1983 Cold War movie WarGames, the computer Joshua famously concludes that nuclear war is a “strange game” in that “the only winning move is not to play.”  What would it look like if the UMC decided the game must be over?   I am not talking about schism.  Neither am I talking about the unilateral disarmament of one side as often proposed by the combatants.  A true solution would neutralize the fighting so the enormous energy currently spent internally could be redirected outward toward the mission Jesus called us to do.

Ancient Israel dealt with a reality somewhat similar to the United Methodist Church.  They were sandwiched in an often disputed zone between larger powers.  When empires on the south end of the Fertile Crescent wanted to expand northward, or Mesopotamian empires wanted to march south, they came through Abraham’s inheritance, the only fertile land-bridge between the two.  One reason King David is so celebrated is that he raised Israel to sufficient strength to become a culture unto its own.

A weak church, like a weak Israel, will always be the pawn of stronger cultural forces.  (It is said of the Episcopal Church that they gradually went from being the “Republican Party at Prayer” to the “Democratic Party at Prayer.”)  A strong church has her own identity, her own clarion voice declaring the Word of the Lord.  Some of us dream of a day when the the Son of David will rule over the church to an extent that we will shed our borrowed, lesser identities and idolatrous flags we wave.

I agree with Bishop Carder that schism, in the final analysis, is a failure of both love and leadership.  Non-schism solutions to the divisions in our church do exist.  Along with the Wesleyan Covenant Association, I reject the Local Option as I believe it would only intensify the conflict in our church.  I have written four solutions (see the info-graphics below) that would keep everyone in the UMC and serve to neutralize much of the vitriol.  Perhaps some of these will be studied by the Council of Bishops’ Commission on a Way Forward whose members were announced this week.

I was recently asked by a Church Polity class at Wesley Theological Seminary to predict a best and worst case scenario for the UMC.  My best case scenario is an authentic, Holy Spirit revival in our church (even though that would be very messy in its own right). My worst case was not schism, even though I am opposed to it.  The worst scenario would be an open-ended continuation of our status quo where we languish on, locked in an intramural battle we were never meant to fight.  Averting schism does not mean that we have necessarily won a victory over partisan cultural forces.  It might mean that we continue to be their stomping grounds, their Bloody Island, until the river of time erodes us into memory. 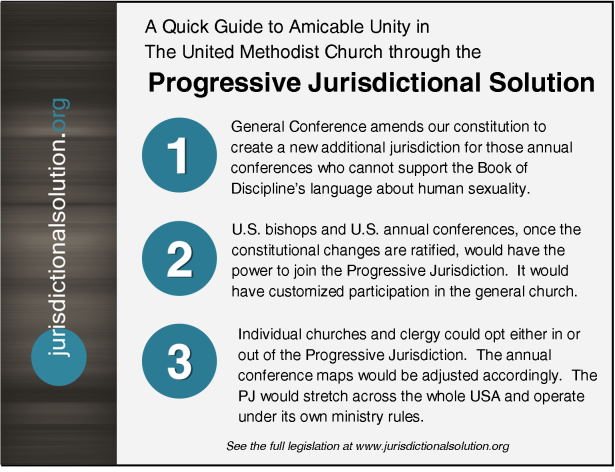 6 thoughts on “Bloody Island: The Partisan Political Forces Holding the UMC Together”