Tom Berlin is one of the great figures in the United Methodist Church.  He is on the Progressive side of social and theological issues, and he is intensely interested in church vitality and growth.  A large church pastor, he is a gifted communicator and a pragmatic solution-seeker diligent in tackling the divisive issues bedeviling The United Methodist Church.  Tom developed a well-known illustration involving sugar packets to describe of the various camps in our denominational human sexuality struggle.  He attributes the basic categories to Tom Lambrecht, Vice President and Business Manager of Good News. 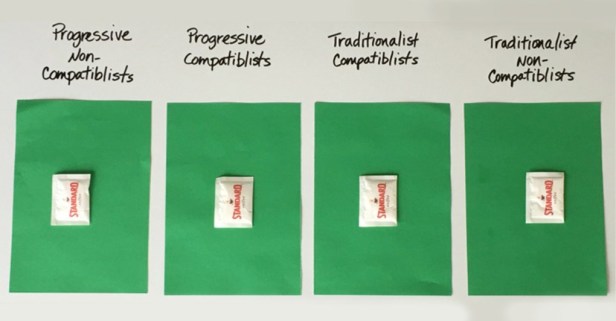 On the theological left of the UMC, Progressive Non-compatiblists demand that the entire church change our stance on human sexuality as they work to completely stamp out discrimination based on sexual practice.  On the other end of the spectrum are Traditionalist Non-compatiblitists who are insistent on maintaining the current language in the Book of Discipline around ministry and human sexuality.  Progressive compatiblists, while desiring to see same-sex weddings conducted in the UMC, are deferential to the existence of conservatives in the church whose stance they realize is born of genuine conviction.

Then there are Traditionalist Compatiblists.  Berlin defines folks in this category as follows:

These people hold traditional views on human sexuality but understand that other pastors or churches would like to have the option of offering marriage ceremonies to same-sex couples. Some Annual Conferences want to have the ability to ordain people who are practicing homosexuals. While they do not want to be forced into performing such a marriage, they can live in a denomination where this occurs, understanding that there are many issues beyond this where they find unity in our connection.

Descriptions of these four categories can be quite misleading if people come to think they are equally populated.  They are not.  The majority of United Methodists believe what the Book of Discipline teaches about human sexuality whether they are vocal about this or not.  The Traditionalist Compatibilist is actually a very rare bird.  I myself spent some considerable time and effort trying to stake out ground in this category.  I might have even been its standard-bearer as I proposed several “jurisdictional solutions” that would sort the U.S. church into two basic ministry approaches while retaining connection with one another.

The election of Karen Oliveto to the general superintendency of our denomination caused me to abandon hopes for a lasting structural peace that uses our current definition of Connectionalism AND includes all the players currently in the UMC.

ALL MIDDLE GROUND IS TRANSITIONAL

Progressive Compatiblists have decided that acceptance of same sex marriage is a fait accompli in the larger U.S. culture and that the church will soon need to get on board  in order to have a future.  Many of these folks are rather muted about their convictions in their local churches, waiting until the cultural temperature adjusts in the church.  They don’t want to conduct potentially divisive same sex weddings today, but five years from now that story might change.  They are on the Progressive journey in terms of their understanding of human sexuality.

Tom Berlin and other self-described Progressive Compatiblists are working hard to put together a moderate coalition in order to maintain their version of United Methodism. This is a challenging task.   They see the powers that be in the Western Jurisdiction, Northern Mid-West, and East Coast are defiant and will not relent until the entire denomination views human sexuality they way they do.  The absolutism of the far left tends to dash hopes for a stable settlement.  Traditionalists have the votes at General Conference to keep the language in the Discipline as it now stands, but accountability is a wearying struggle.

As stated, Traditionalist Compatiblists are a micro category in the larger church.  You can only spot them if you know where to look.  For people like myself, it can be a transitional state adopted to consider options for structural peace.  The permanent residents of this category are folks that put the preservation of the institution above their scriptural ideology.   Watch for people elected to high positions of leadership or those whose position is dependent upon the status quo.  Some are institutional loyalists in denial of what we are actually facing.  Like faithful Sears shoppers, they don’t want to hear how things are soon going to irrevocably change.

When you hear about meetings of “Centrists”, just know that you are dealing almost exclusively with institutionalists of the Progressive Compatiblists variety who aren’t quite ready to be thrown in with the Western Jurisdiction.  Progressive Incompatiblists will cheer on these Centrist efforts because all they ultimately need is the passage of some sort of Local Option to break us away from the influence of the global church.  If they get the rules changed, they can apply pressure to pick off hold-out conferences one by one.  Their crusade can continue unabated.

A group of  48 Progressive Centrists gathered in Nashville recently to strategize their future.  I look for a very compelling, newly-packaged version of the Local Option to be championed by these folks.

TRADITIONALIST INCOMPATIBLISTS ARE THE LARGEST AND MOST DIVERSE CATEGORY BY FAR

As I moved from Traditionalist Compatiblist to Traditionalist Incompatiblist, I discovered what a diverse group we actually are.  This is by far the most ethnically diverse category in the UMC, but its diversity can be seen in other ways.  Some are very “high church” and some are quite “low church”.  We have Evangelicals and members of the Order of St. Luke.  We have almost all the Holiness folks and Charismatics currently in the UMC.  The Africans are by far the largest segment of the category, and they are quite institutionally-minded.  The Central Conference of the Philippines and many other Asian United Methodists would reside here.  We also have some Europeans.

The Wesleyan Covenant Association also fits securely into this category.  Some in WCA, like myself, are “leaning in” to the UMC as we maintain hope that the denomination can be saved.  Others in WCA are “leaning out”, seeing a brighter future starting over from scratch.  A few isolated defections aside, we have decided to throw our lot in with each other and see this thing through together as the Council of Bishops presents its solution.

Sugar packets aside, we have arrived at the point where the only two categories that matter are (1) those who will abide by our Discipline and (2) those who will not.   The moral vision of the New Testament related to human sexuality is authoritative or it is not.  A center category between these two options is becoming a ghost.  A structural solution that holds both these opinions in the same sort of Connectionalism we have now died with the election of Karen Oliveto.

The burden is on the dissenting conferences to come up with a compelling rationale for why and how they should be allowed to carry the UM banner even though they reject the discernment processes of the UMC.  I think the best way forward is to formalize the autonomy these conferences have demonstrated and negotiate in good faith for their customized participation in the general agencies of the denomination.  Collaborative plans could be made to swap clergy and congregations between traditional conferences and newly autonomous conferences in order to achieve a stable peace.  I hope the Commission will be recommending something like this to our Council of Bishops.

36 thoughts on “Why are “Traditionalist Compatiblists” So Hard to Find?”