A question I am often asked these days is what I think the Commission on a Way Forward is going to propose.  I don’t have any insider information. I do have several friends from across the spectrum that are Commission members, but they uniformly stick to referencing the official statements of their blue ribbon group.    The Commission actually “belongs” to the Council of Bishops and our episcopal leaders will get the first peek.  Since the bishops don’t convene again until November, we can expect something of a lull until then.

But, of course, that won’t keep us from speculating.

A press release came out yesterday from the Commission that some have argued doesn’t say much.  I disagree.  I think it says quite a lot.  According to yesterday’s status update, the future they will propose will look very different from the one we have now.  They see a “loosely configured structure” with a “thinner Book of Discipline.”  In other words, they are bringing a massive structural plan that will fundamentally alter our understanding of United Methodism.

I see this as a positive.  It means we are not going to get some sort of weak sauce local option.  It also means that the voice of the global church is being taken seriously.  The fact that the evangelicals and Africans on the Commission are heading down this road means that it will not be some sort of single “U.S. Central Conference” Plan that allows standards for the American church to lurch leftward in some sort of wholesale fashion.  I interpret the Commission’s words to mean that there will be more than one flavor of United Methodism in the United States.  (Those who have been paying attention know this is already the case.)  Since this is a peace plan, we will have more than one team for annual conferences to join, along with some sort of sorting mechanism that will put dissident congregations and clergy in a new group should they wish this.  Peace can’t be achieved any other way.

I know a few things about structural proposals for the UMC, having written several myself.  One thing all large structural plans share is that they impact our Constitution.  Amendments to our constitution must be passed by a 2/3 margin at General Conference and ratified in each of the annual conferences across the globe by the same aggregate percentage.  This means United Methodists will be holding their collective breaths not once but twice.  One will be at General Conference 2019 in St. Louis when the plan is voted on.  (If it fails by five votes, what is the back-up plan?)  The other pregnant pause will last at least a year as annual conferences across the globe vote to ratify.  If we push the timetable, we might know by General Conference 2020 whether the grand plan is acceptable to the church.

Based on yesterday’s press release, the Commission will be offering us nothing short of a “New Connectionalism.”  The United Methodist Church will become an umbrella for several smaller denominations, each with their own ministry standards.

WARNING:  What follows is wholesale speculation on my part.  It is not based on any insider information.  This is just me extrapolating based on what I know of the landscape and the players around the table in the Commission.

The nature of the UMC would transform into a much looser umbrella organization providing connection and shared services to its affiliated denominations.  It would be more communion than church.  Each annual conference in the United States would be organized out of their current jurisdictions and into one of three overlapping “central conferences.”  (Central conferences are what we currently call the seven regional clusters of annual conferences we have around the world. They are analogous to our U.S. jurisdictions.)  I think the Commission will probably find a new name for these upper judicatory structures, but for now I will use the name we currently have.  Think “little denomination.”  Everyone would be United Methodist, but in another sense no one would be United Methodist.  Each of the ten denominations will have its own name, ministry rules, and Book of Discipline that stands underneath a thin general Discipline.

Why would America be divided into three central conferences?  Why not two?  I believe the Moderates on the Commission would insist on a middle option from which U.S. annual conference could choose.  Rather than being organized solely on geography, the U.S. central conferences would be based on ministry covenants and would overlap on the map.  One judicatory would keep the current ministry standards in the Book of Discipline (and mean it).  For our purposes here, I will call it the Traditionalist Central Conference and I depict it on the maps below in blue.  A second judicatory would be silent about whether LGBTQI persons should be married and ordained so that these matters could be handled at the local church and conference level.  The assumption would be that this central conference would slowly transition to full LGBTQI acceptance.  I will call this the Centrist Central Conference and depict it in green.  A third judicatory would immediately guarantee the right of LGBTQI persons to have same sex marriages in church and for conferences to ordain clergy regardless of their sexual practice.  I will call this the Progressive Central Conference and depict it in yellow.

I am a visual person.  Info-graphics, charts, and maps graphs really help me understand things.  For this reason, I wanted to develop annual conference maps based on three overlapping U.S. Central Conferences.  Of course, this is an impossible task as it requires clairvoyance into how each conference would vote a couple years from now.

The Progressive Central Conference would, on its surface, seem like the conference of choice for the eleven annual conferences that have officially voted to defy the UMC ministry standards.  However, progressivism is an inherently missionary ideology.  Why would our most progressive conferences vote themselves into an ideological ghetto when they have the opportunity to advance their cause into new territory?  For this reason, I think there stands a good chance that the Progressive Central Conference would be left empty.  But the model I developed nevertheless shows these eleven annual conferences in yellow and as part of their own central conference.

The Moderate Central Conference will be fairly attractive to many United Methodists because it is simply the one in the middle.  We tend to like the middle of the road.  The question remains, however:  Will the middle still be the middle once the Traditionalists are gone?  While there is some legitimate doubt that Progressives would choose the Progressive Central Conference, there is no doubt that many Traditionalists would be leaving to their own judicatory.  This exit will have a leftward slingshot effect on those trying to hold the middle.

Take a look at the Schism Map I recently developed.  You can see where the most stridently Progressive areas of the UMC are (shown in white and light gray).

Now, compare this with what we know about America.  We can almost predict the shape of the future three American United Methodist denominations.  Their conferences will be geographically larger in those areas where fewer of their ideology reside.

Every model begins with assumptions.  Here are mine:

Here are the statistical assumptions on which my model is built:

Here is where my model resorts to particularly large speculation.  What conferences will go where?  For the sake of a beginning point, I assigned the eleven conferences currently in schism to the Progressive Central Conference.  I then chose a slightly higher number of conferences to go with the Traditionalist Central Conference (shown in blue).  I chose six conferences at random in the South Central Jurisdiction and ten at random from the Southeastern Jurisdiction.  Argue with these assumptions all you want.  This is just a thought exercise.

The more detail I give you, of course, the shakier my information becomes.  I went ahead and randomly mapped the three new United Methodist denominations based on their projected representation in each of the old jurisdictions. 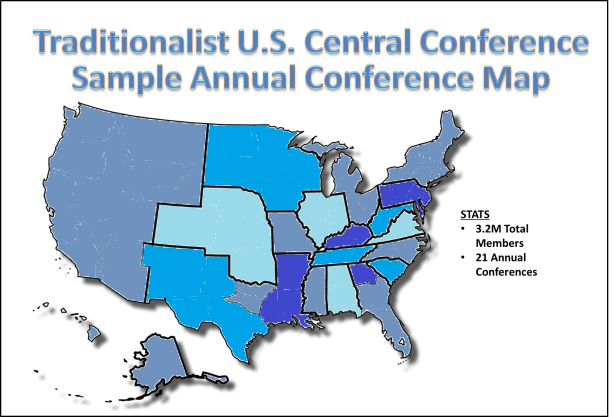 Using the average conference size, I was able to calculate how many members would be in each new Central Conference in each of the old jurisdictional territories.  Using this VERY rough model:

Those who followed the development of my Jurisdictional Solutions will recognize the similarities.  Just as I am no longer promoting them, I am not necessarily supporting this model, either.  I simply think that something like this is the only place The Commission can go given their mandate and the current environment.  Of course, their particular model will be diverge from mine in any number of ways.

The final nail in the coffin of the Jurisdictional Solution was, I think, the election of Karen Oliveto as a United Methodist bishop.  When you need separate episcopacies, you need a separate church.  And this is really what this plan involves:  The formation of three new Methodist denominations under the umbrella of American United Methodism.  A necessary allowance for the acceptance of this model would be the dissolution of the general superintendency of bishops.  A bishop in one Central Conference would not have official temporal and spiritual oversight in any of the others.  United Methodism globally will become a confederation of smaller denominations similar to the World Methodist Council.

I expect the American central conferences would not call themselves “Progressive”, “Centrist” and “Traditionalist.”  They would choose separate denominational names and logos.  What would these three denominations share?  Along with the seven central conferences that currently exist, they would be part of ten global denominations that comprise a new form of United Methodism.  They would share a long history.  They would be served by and help shape the reorganized General Boards and Agencies of the United Methodist Communion.  There would still be a Council of Bishops, but the role of this group would be reduced as more energy is placed at the College of Bishops level.

If the Commission brings a grand plan like this to General Conference 2019 and it fails the required supermajority passage, there will be a very long and uncomfortable “Now what?” moment.  We could be in for a scramble to find some way to hold our United Methodist flotilla together.  If the plan passes, the church will have a year-long uncomfortable wait as the ratification votes take place. Will African conferences vote favorably upon a plan that allows some United Methodists to take an alternative view to human sexuality?  Time will tell.  If ratification fails, it would be up to General Conference 2020 to make a last ditch effort to avoid dissolution of the connection.

All these factors are very good reasons to redouble our efforts in praying for The Commission.  It looks to me like they are working to put forth a very bold comprehensive plan.

Note:  David W. Scott offers a very helpful contribution related to how the Central Conferences might fare in a loosened UM Connection.  Check it out at UM & Global.  This post serves as a good primer on global United Methodism and balances the U.S.-Centered analysis that I offer.

45 thoughts on “Mapping the Future of the UMC”